Books That Matter, on: 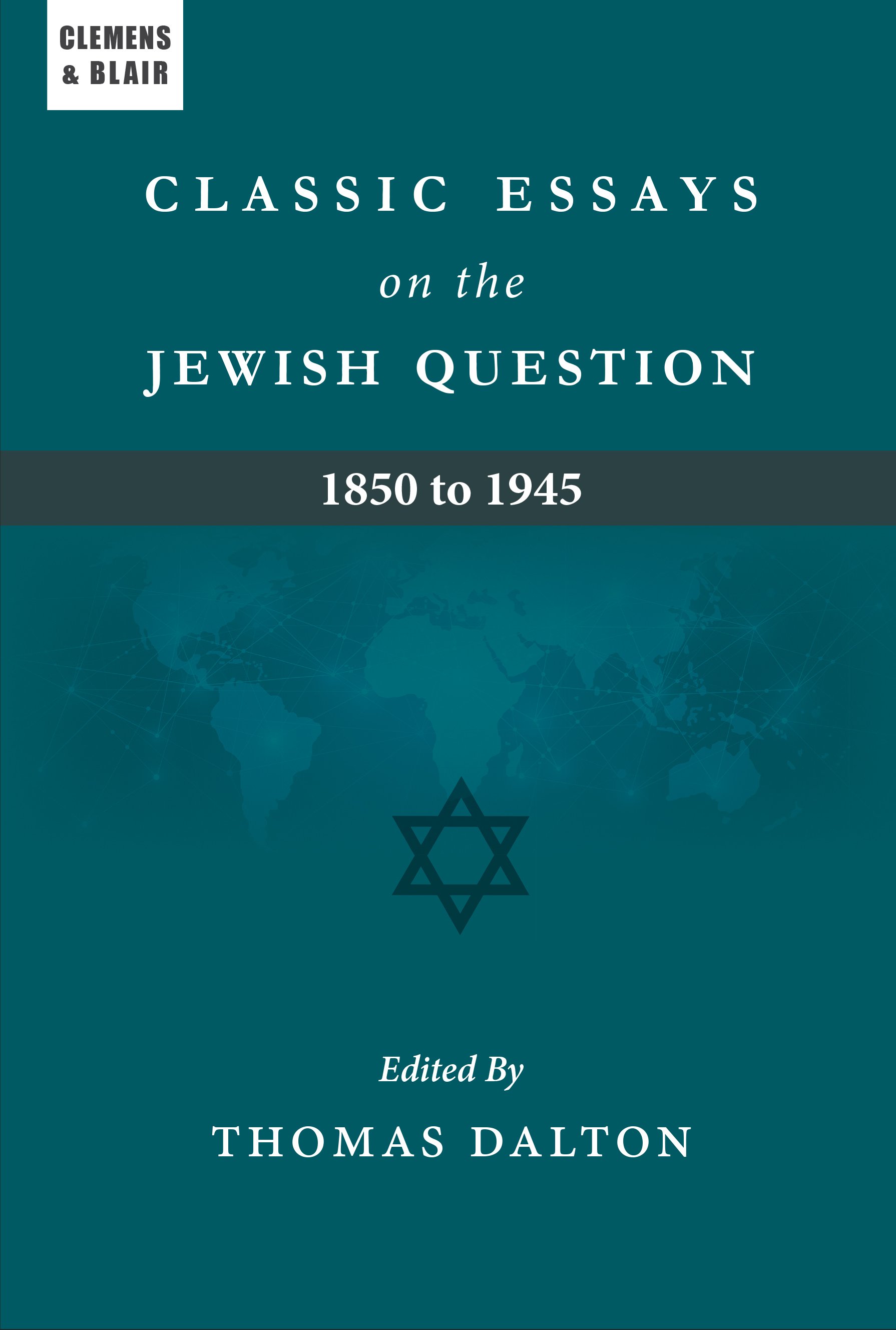 CLASSIC ESSAYS on the

Most people know about "issues" with Jews, but few understand the depth and history of the Jewish Question, which is perhaps the most vital issue of our day.  Here, we have compiled 16 of the most important and most influential essays of the past 150 years.  Writings by Richard Wagner and Dostoyevsky are contrasted with the words of Hitler, Himmler, and Theodor Fritsch.  Seminal ideas are contributed by Wilhelm Marr, Edouard Drumont, Ezra Pound, Robert Ley, and others.  Essential reading.

Books You are Sure to Enjoy

We at Clemens & Blair believe that you, as a reader, deserve to have access to important informational and historical books.
This is a result of our commitment to providing you with the books that will help you better understand some of the most significant events in history.
With these materials, we are confident that you will find information worthy of sharing with friends and other people.

BULK DISCOUNTS:  For purchases of 10 or more copies of a single title, we can offer a 20% discount from list prices.  This applies worldwide.  To arrange a bulk purchase, please contact us directly, via the CONTACT page, or at:  editor@clemensandblair.com.

15% off on the following titles:  (North American customers only, sorry)

On the Jews and Their Lies

Click on "US & Canada" links to purchase, and then enter promo code when prompted. 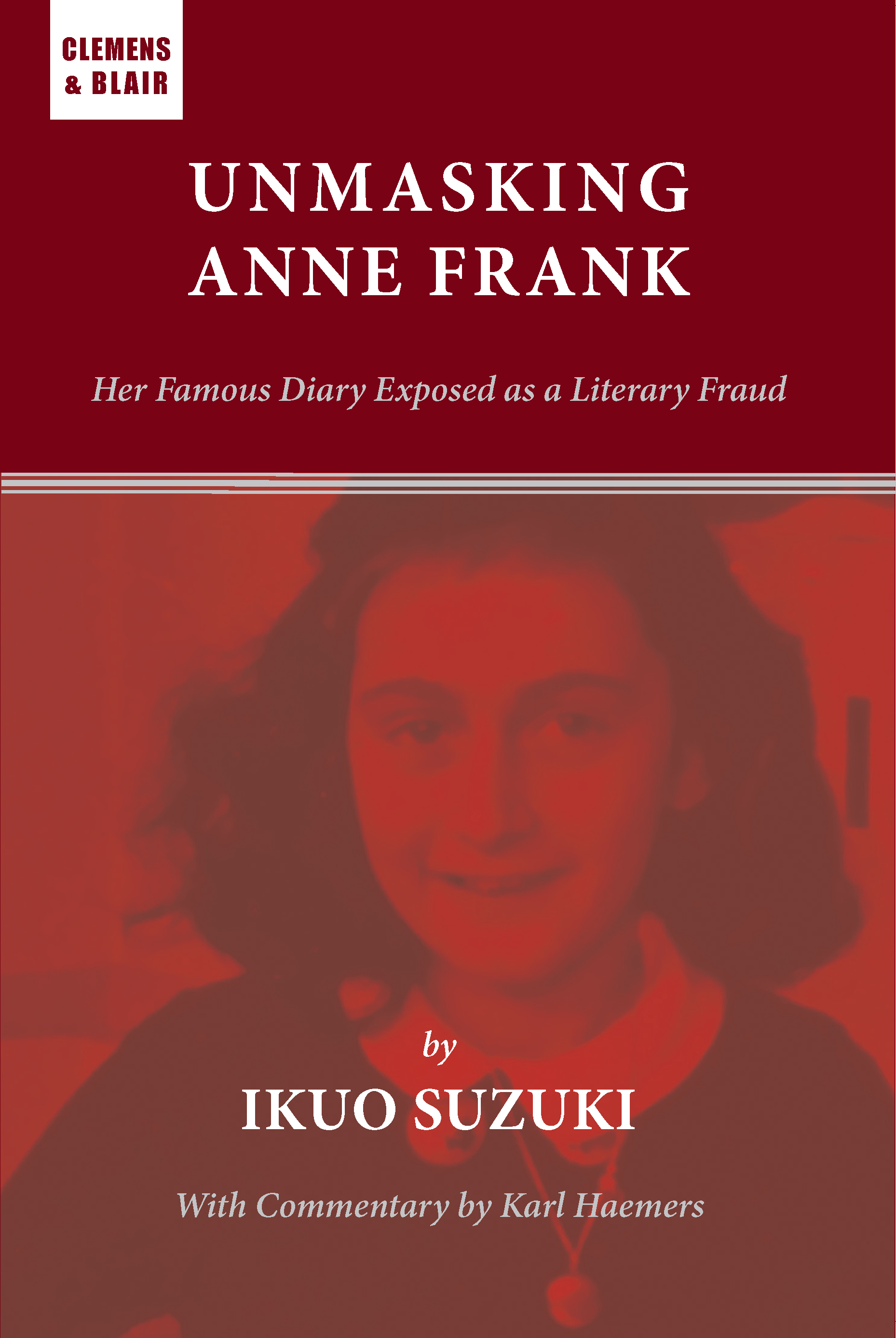 Exposing Her Famous Diary as a Literary Fraud

No single person better represents the face of the Holocaust than Anne Frank.  As a 13-year-old Jewish girl living in wartime Amsterdam, she hid out with seven other Jews for over two years.  During this time, she kept a diary of her thoughts, feelings, and experiences.  Eventually the Frank family was discovered and deported; Anne later died of typhus in Bergen-Belsen at the age of 15.  But her diary lives on.  Today, the Diary of Anne Frank is an icon of Jewish suffering amidst the vast sea of Holocaust literature, and Anne herself has become a high priestess in the pantheon of Holocaust martyrs.

Millions of people know of Anne’s story, but very few know of the many problems with it.  As it turns out, Anne’s tale is rife with absurdities, logical problems, inconsistencies, and incoherent claims.  Here, Japanese researcher Ikuo Suzuki deconstructs Anne’s famous dairy, exposing the many issues lying just below the surface.  In the process, he unmasks the truth: that the notorious diary was likely written by a middle-aged Jewish man who worked in conjunction with Anne’s father, Otto, to foist upon the public a deceptive and highly misleading story of a young teenage girl who perished in a German camp.

Here, for the first time, Suzuki presents a thorough, detailed, and highly readable critique of the global bestseller that is Anne Frank’s Diary.  Far and away the best critical analysis of the famous diary, this book fills a badly need gap in contemporary revisionist literature.  Our view of Anne Frank will never be the same again. 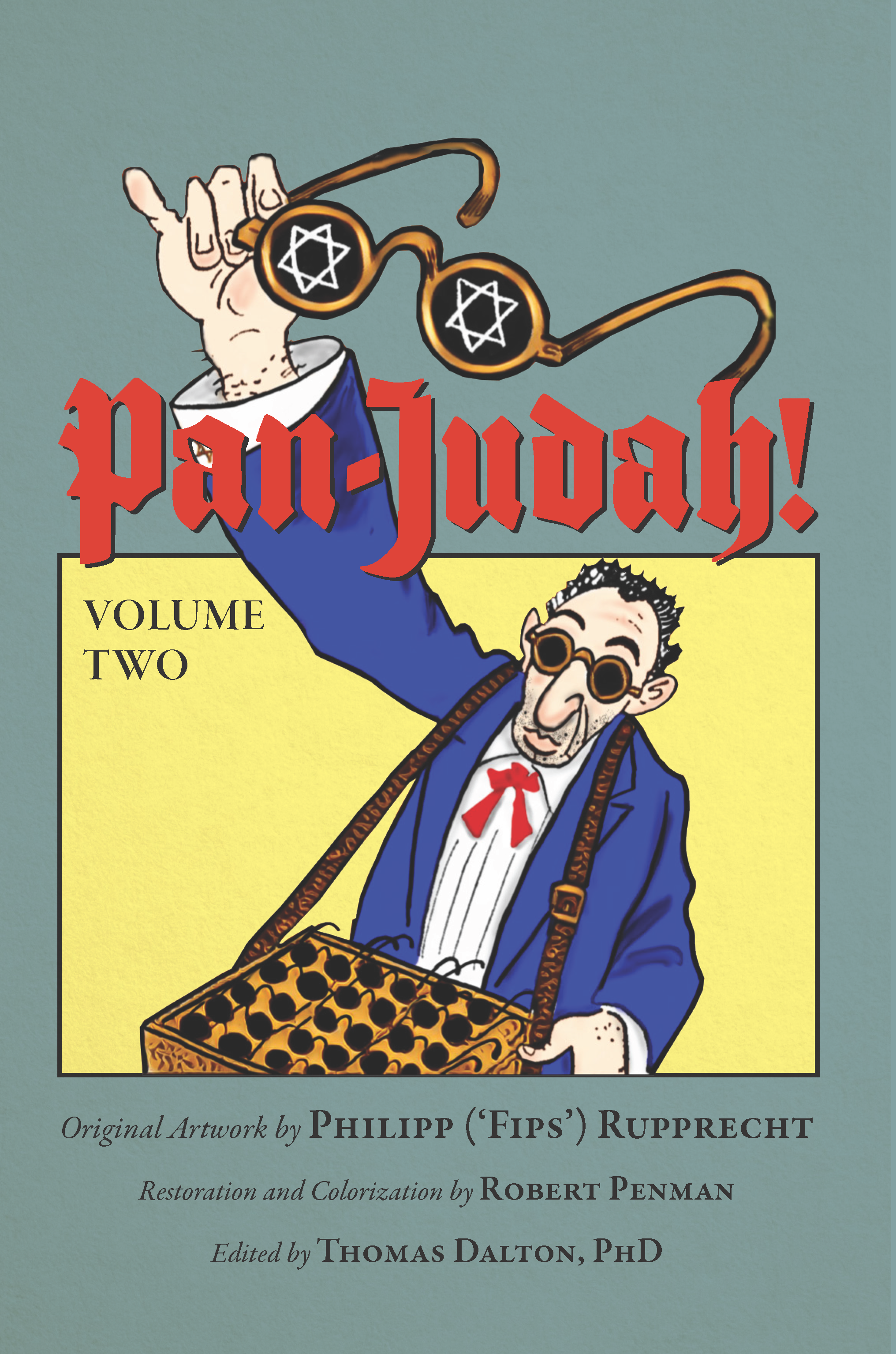 As a follow-up to our popular initial collection, we now offer another 200 fabulous images by the renowned German artist, Fips.  All dating to the years 1925 to 1945, these cartoons give a fascinating insight into the worldview of National Socialist Germany.  Needless to say, such images could never be published today.  Thankfully, contemporary digital artist Robert Penman has recovered, restored, and colorized these original black-and-white images, bringing them to life as never before.  Chapters are organized thematically: "Blood Libel", "Money-Grubbers", "Wire-Pullers", "Soviet Union", "USA", and so one.  Also included is a selection of compelling non-Fips cartoons from the same era.  Fun, entertaining...and educational!
August 2022.  268 pages, full color.  Available NOW in paperback:

For centuries, people have struggled with what became known as "the Jewish Question": How should societies deal with this troublesome, pernicious, and domineering minority in their midst?  Here, we have collected 16 classic essays on this subject.  Chapters include: "Jewry in Music" by Richard Wagner, "Conquest of the World by the Jews" by F. Millingen, "The Jewish Question" by Fyodor Dostoyevsky, "The Victory of Jewry over Germandom" by Wilhelm Marr, "Jewish France" by Edouard Drumont, and "The Jewish Question in Europe" by Civilta Cattolica.  The collection also includes important writings by Hitler, Himmler, Theodor Fritsch, Ezra Pound, Robert Ley, and others.  Expertly translated and edited, nothing like this collection has ever appeared before.  It will surely become a central reference for all those concerned about the role of Jews in modern society. 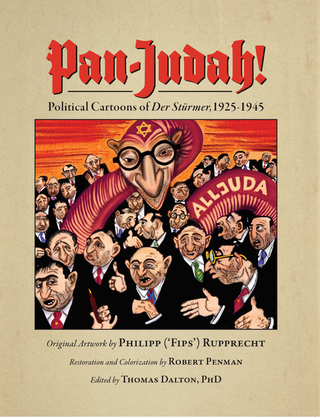 The most notorious newspaper of NS Germany was "Der Sturmer".  Every week, it featured a prominent anti-Jewish cartoon on the front page.  Now, artist Robert Penman has restored and colorized 200 of the best images of the cartoonist 'Fips'.  Vivid and stunning, these images come to life like never before.  Not to be missed!

Sample of the images from Fips/Penman below.... 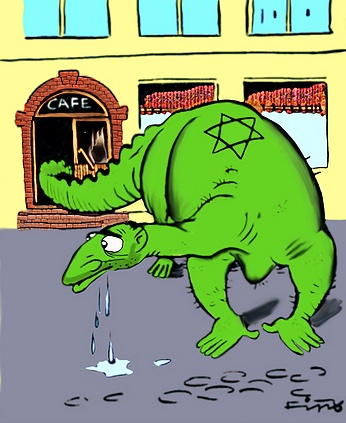 Original Artwork:  Fips Rupprecht
Restoration and Colorization: Robert Penman
Editor:  Thomas Dalton
Description:  The most notorious newspaper of NS Germany was "Der Sturmer".  Every week, it featured a prominent anti-Jewish cartoon on the front page.  Now, artist Robert Penman has restored and colorized 200 of the best images of the cartoonist 'Fips'.  Vivid and stunning, these images come to life like never before.
2021; 278 pages.
Three formats available.  See above links to purchase.

The Myth of the 20th Century

Author:  Alfred Rosenberg
Description:  Now, for the first time in decades, a newly-edited and annotated version of Alfred Rosenberg's NS classic.  Widely viewed as second in importance in Hitler's Germany (only behind "Mein Kampf"), this book is a masterpiece of National Socialist ideology.  Far surpasses all existing English editions, this version will be the standard for years to come.  Includes section headings, helpful footnotes, and full index.
2021; 478 pages.
Paperback:  $30
Hardcover:  $50

On the Jews and Their Lies

Author:  Martin Luther
Editor:  Thomas Dalton
Description:  As the founder of the Lutheran church, Martin Luther (1483-1546) struggled against many enemies -- none more pernicious than the Jews.  They not only repu-diated Christian theology, but their arrogance, usury, and malevolence posed real and enduring threats to society.  In this classic work, Luther lays out his case against the Jews in the strongest of terms:  seize their wealth, destroy the synagogues, drive them out -- this was his message.  Complete and unedited.

Author:  Ernst Hiemer
Description:  Among the most controversial of Nazi publications, this children's book was published in 1938 under the title Der Giftpilz -- or, The Poisonous Mushroom.  Here, the Jewish threat to German society is portrayed in the most simplistic and elemental terms.  The author, Ernst Hiemer, put together 17 short vignettes or morality stories intend-ed to warn children of the dangers posed by Jews.  Jews were depicted as conniving, thieving, treacherous liars who would do anything for per-sonal gain.  'Avoid Jews at all costs, ' was Hiemer's underlying message.
Price:  $16
2020; paperback; 72 pages; full color.

Author:  Adolf Hitler
Editor:  Thomas Dalton
Description: New English translation of the classic work by Adolf Hitler.  This edition brings together the best, timeliest, and most interesting passages from the original two-volume work.  It is literally the "best of the best," and is ideal for those who would prefer to not peruse the full 2-volume set.  This edition in-cludes a detailed introduction, sec-tion headings, helpful footnotes, bibliography, and a useful index.
Now available:
E-BOOK ($3.33):

Author:  Ariel Toaff
Translators: G. Lucchese and
P. Gianetti
Description:  For centuries, Jews have been accused of something called "blood libel" or "ritual murder": the killing of non-Jews, often child-ren, for their blood.  This was long dismissed as anti-Semitic conspir-acy theory, until the early 2000s, when Israeli scholar Ariel Toaff conducted extensive research into medieval trials; he concluded, sur-prisingly, that there was a factual basis for the ritual Jewish use of human blood.  This is the original, UNEDITED version of the book.
Price:  $23
2020; paperback; 350 pages.

Author:  Thomas Dalton, PhD
We all know the standard Holocaust story; but is it true?  What if large portions of the story have been exaggerated or falsified?  This would have huge repercussions for the present day.  Widely considered the "best book on the Holocaust," this is essential reading for all who are curious about the debate.
2020 (4th ed.); 330 pp.

Author:  Thomas Dalton, PhD
Best short introduction of the many problems with the Holocaust story.  Covers all the key issues and provides a basic overview of the entire debate on the Holocaust.  No heavy math, few calculations or statistics -- just the straight story.  The perfect book to start with.
2016; paperback; 120 pp.
Price:  $14.50

The Jewish Hand in the World Wars 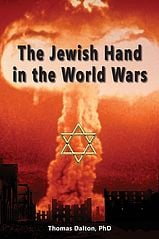 By Thomas Dalton, PhD
For centuries, Jews have played a disproportionate role in war, strife, and revolution.  Why is this?  This book is the first to elaborate the context in which Jews came to be a driving force behind both World Wars.  An eye-opening and well-documented book.
Price:  $20.50
2019; paperback; 184 pp.

Hitler on the Jews 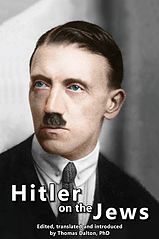 Edited by Thomas Dalton, PhD
Everyone knows that Hitler hated the Jews.  But why, exactly?  And what were his actual words on the matter?  Now, for the first time, you can read nearly everything Hitler said on this most important of topics.  Relevant excerpts have been taken from his letters, speeches, and Mein Kampf.  A fascinating read.
Price:  $21
2019; paperback, 194 pp. 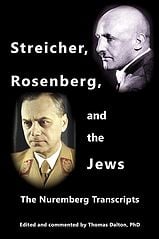 Edited by Thomas Dalton, PhD
The full story of the Nuremberg trial of Julius Streicher and Alfred Ros-enberg, the two most important defendants on the Jewish Question.  Contains extended passages of original transcripts from the trial, along with insightful commentary.  A rare opportunity to hear from both men, transcribed live, raw and un-edited.
Price:  $28
2020; paperback; 310 pp.

Goebbels on the Jews 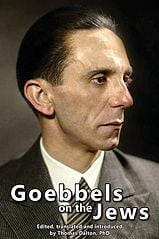 Edited by Thomas Dalton, PhD
Contains the full diary entries, over 22 years, of Goebbels' personal ob-servations on the Jews (in English and German original).  Also includes full text or excerpts from 10 important essays on the Jews.  A monumental and unprecedented book, essential reading.
Price:  $26.50
2019; paperback; 265 pp. 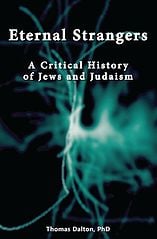 By Thomas Dalton, PhD
Jews have been the perennially hated people.  Wherever they came into contact with others, they made enemies.  This long story has now been fully documented for the first time.  Read the opinions of many of the greatest minds in history, and discover why the Jews pose an unsolvable problem for society.
Price:  $19
2020; paperback; 172 pp.

We at Clemens & Blair believe that you, as a reader, deserve to have access to other informational and historical book -- even those that we do not publish or sell.  This comes from our commitment to providing you with the books that will help you understand the most significant events in history.  With these materials, we are confident that you will have more information worthy of sharing with friends and others.

SEE OUR AFFILIATED BOOKSELLERS BELOW

Additional information on many of these books can be found on the personal website of our lead editor, Thomas Dalton:

Our book offerings will …

Shine a light on some very dark corners! 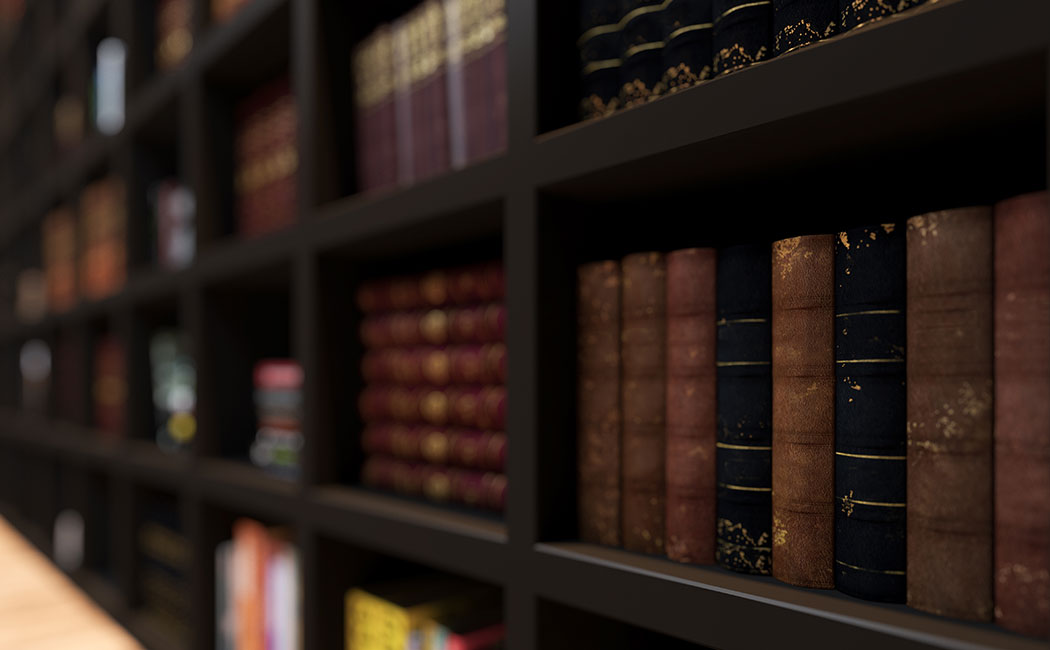 As a small, independent, non-profit publisher, we operate with a bare minimum of financial reserves.  If you enjoy the products we offer, and if you would like to help us spread the word, please consider a small financial donation.  More resources means that we can do more promotion and advertising to reach new readers.  And it allows us to support new book projects, new translations, and new compilations.  Simply put, the more resources, the more people we can reach.

If you wish to learn more about our publishing company, please feel free to contact us.  Our representatives are here to answer all of your questions.  We hope to hear from you soon.

All correspondence is completely confidential